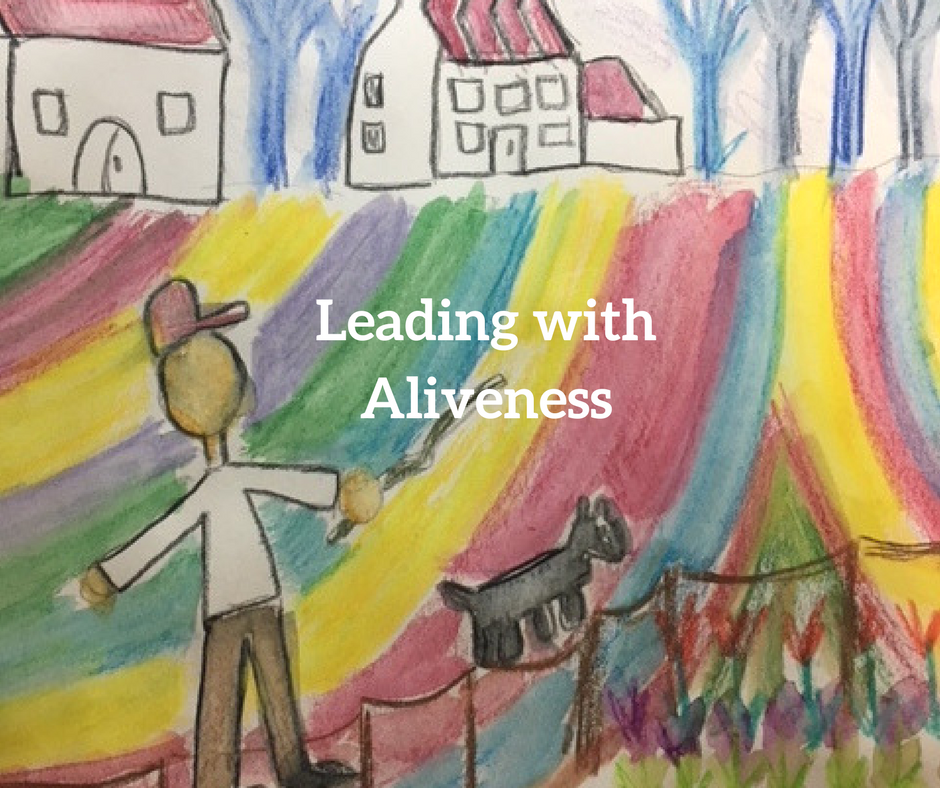 What supports you in experiencing aliveness?

So many of my executive clients, colleagues in organizations and others I meet report feeling stressed and disconnected these days. It is not surprising. Most organizations are experiencing disruption and change is a constant. Often companies are cutting resources yet more and more is required. There is a sense of unease and polarization both in organizations and everywhere.  Our daily news is filled with challenges and conflict.

Leaders need to start with themselves. They need to make it their intention to create positive and productive environments—even one interaction at a time.

It is worth the investment in paying attention to your experience and then recalling your commitment to create an innovative and inclusive environment. Yes, this does mean slowing down a bit to become aware and to really see your colleagues and to listen. It means catching yourself when you feel competitive and want to win over someone.  By being self-aware and making small shifts in our interactions, people start to feel heard and seen and more alive, and then they relax a bit too and are more apt to bring forth new and creative ideas.

Leaders can ask themselves, “Am I open to possibilities and experiencing aliveness?”  It is useful to develop a small practice or habit to keep focused on your intention. Perhaps you appreciate your situation and colleagues as you travel to work. You may take a walk, enjoy nature or a hobby, breathe deeply or listen to an inspiring podcast. You can share your goal to listen and create an open-minded atmosphere with a friend or a coach and reflect on your progress.

As we make the intention to be alive and open and engage in meaningful conversations the climate begins to change. Changing the culture involves supporting others in also being more open and addressing the systems and norms of the organization to be supportive and aligned.

Renew your intention of creating a positive and productive environment and start with noticing and nurturing aliveness in yourself. 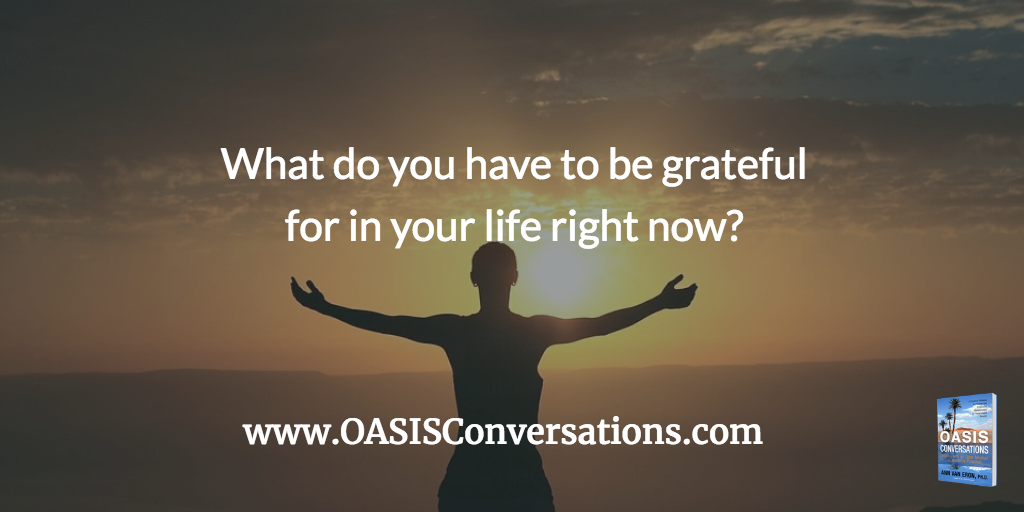 It’s one thing to understand that compassion, gratitude and other positive states will benefit us in our interactions and another thing to actually access these experiences when we need them.  Because of our natural negativity bias which we use to protect ourselves, we tend to pass over the positive states.

Once we decide we want to be more grateful, like any skill, we need to develop the habit of actually being more grateful. Fortunately, we know now about the neuroplasticity of the brain and that we can learn and develop in a relatively quick time (with intention).  It is not enough to meditate or think about gratitude.  We need to reflect on what we are grateful for. For example, one of my executive coaching clients began to devote five minutes at the start of his day to call to mind his team members and recount what he appreciates about each person. This was not a rote counting of their strengths; rather, he allowed himself to experience real gratefulness and noticed that he felt warmth in his chest as he did so.

Rick Hanson, a well-regarded neuropsychologist shares that it is not enough to experience activation of gratitude. We need to actually enjoy it and stay with it and extend the state for a few moments. He emphasizes that savoring the experience supports us in building or installing the neural pathways, so that we can develop the habit of accessing positive states that will serve us and our relationships.

My executive client found his five minute ritual of experiencing gratefulness for his team members to be transformational. He became much more aware of how happy he was with the team and he became calmer and actually started giving more recognition to team members.  His intention and reflection and savoring actually shifted the entire culture of his team and it spread outwards and influenced the larger organization as well

Make it your intention to experience gratitude. Notice your sensations and bodily experience as you do. Savor the experience in order to build the neural pathway of the emotion. Make it a practice to remind yourself of your intention.

Contact us and tell us what you are presently feeling grateful for and how you practice feeling so. 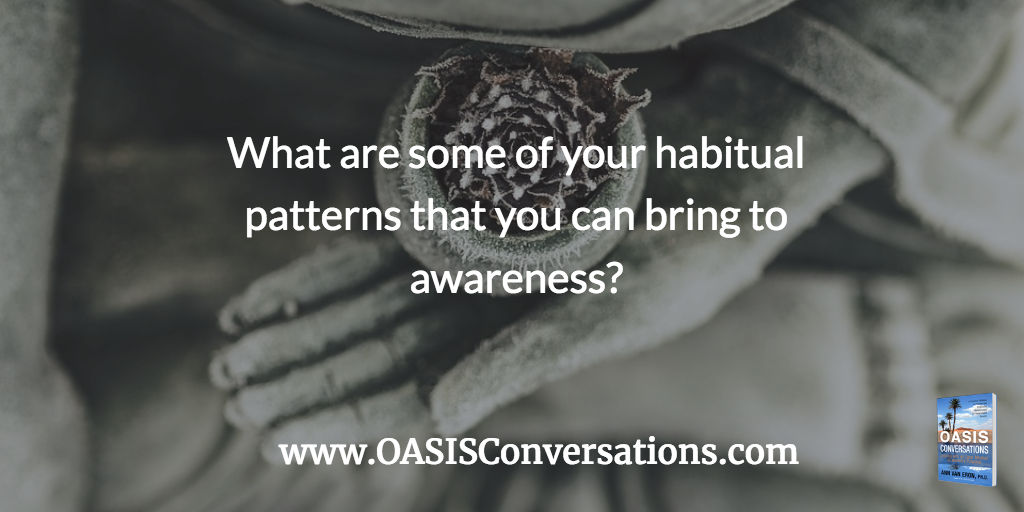 “The first step toward change is awareness. The second step is acceptance.”—Nathaniel Branden

We have each adapted habitual patterns. Researchers estimate that 95% of our behaviors are, in fact, habits.  The benefit is that we take actions without expending a lot of mental energy for decision-making.  Many of our habitual patterns serve us; however, some are no longer useful.  The challenge is becoming aware of our patterns and making choices about what will support us in achieving our goals.  It is useful to appreciate that we each have blind spots.  I often coach executives who do not see that some of their behaviors are causing them to fall short of achieving their goals and even derail in their careers. Often, when under stress, leaders exert more of their habitual patterns that are hurting them such as not listening, criticizing, ignoring or becoming defensive.

It is useful to make it a practice of noticing your thoughts.  You may find that you are constantly criticizing someone or yourself, complaining about too much to do and feeling stressed about a situation.  One of my clients realized that she felt overwhelmed by the need for a reorganization in her department and having a new boss. Under such stress, she buckled down to work and developed the reorganization plan without consulting or including others.  She also failed to inform her manager about the changes she was making. There was a lot of resistance from the staff, and her manager did not support her since he was excluded from her planning, as well. The disruption cost her on many fronts.

Another executive found that he was extremely hard on himself.  He would take on very difficult and visible projects and did not appreciate his contribution and success. Despite his accomplishments, he did not feel confident.  He realized that he had a habitual pattern of immediately starting new projects and had an inner voice saying “don’t show-off” that served him in his humble family.  By becoming aware and consciously appreciating his contributions, he was able to be more relaxed and confident.  Because we had created a safe place to explore their habitual patterns, each of these leaders became aware of what triggered their behavior and explored and chose new options that supported them in their goals.

While it is not easy, it is useful to stop and reflect. You can ask for feedback and often people will be glad to share if they sense you are open to learning.  You can ask others to collect perceptions and engage in a formal coaching process to learn more.  A key for success for leaders and anyone is to become self-aware and then make choices that support your goals.

What are some of your habitual patterns that you can bring to awareness and subsequently be at freedom to choose what will best serve you in your current situation?

No doubt, we are each experiencing a range of emotions as we go through disruption and change after a heated and polarizing election. No matter whether you are experiencing anxiety or joy, it is valuable to make it a practice of noting your emotions and not making them wrong.

Our emotions serve a valuable purpose, they are energy in motion, e-motions that spur us to taking action or refraining.  When we are excited about a project, we are mobilized to jump in and begin.  When we feel hesitant or afraid, we are more likely to put off taking action.

When we appreciate the value of our emotions, we can be more of an observer and take note. A benefit of naming our emotions is that we activate the pre-frontal cortex part of our brain and we become more at choice about what kind of action we want to take rather than unconsciously reacting

Also, when you acknowledge (without judgment) your emotions, they more readily move through you naturally. A feeling of anger or worry can naturally dissipate with attention.  Of course, if we continue to ruminate on an issue and magnify our emotion, we continue to experience the feeling.  Some emotions require us to simply be with them without hoping they shift or leave. The more you become aware of your own emotions the more readily you will be able to notice and give empathy to others. As humans, we are continually experiencing a range of emotions.

Make it a practice of naming your emotions. Just notice and name. 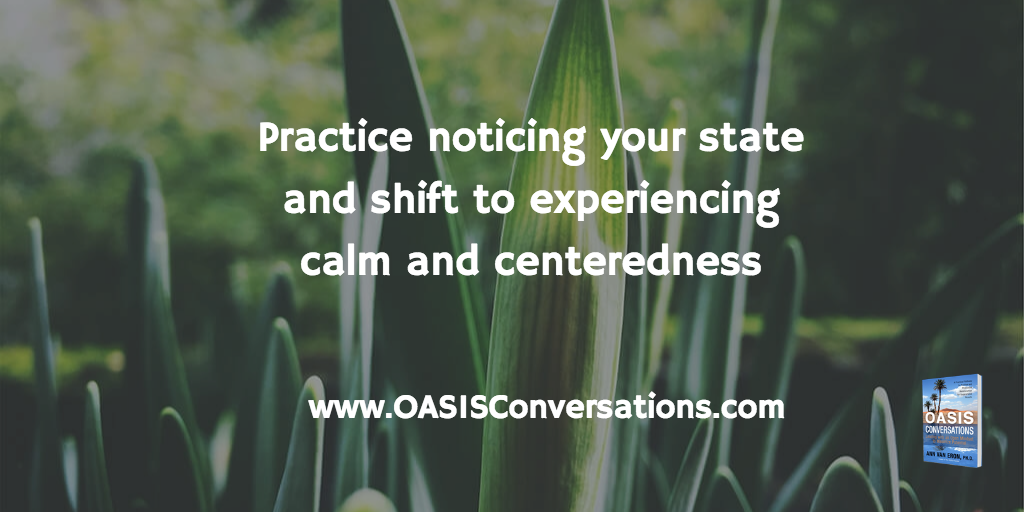 We are in the midst of change in our country, world and in our lives. We have learned that change is a constant and we have successfully adapted to many changes with technology, political shifts, family changes and aging. Even so, change is not easy.

Changing is particularly hard when we feel uncertain and ungrounded. It is easy to imagine the worst and to feel afraid. A part of us wants to hold onto what we have and resists change. When we are stressed we experience contraction and we literally don’t have access to the part of our brain that experiences possibilities. END_OF_DOCUMENT_TOKEN_TO_BE_REPLACED 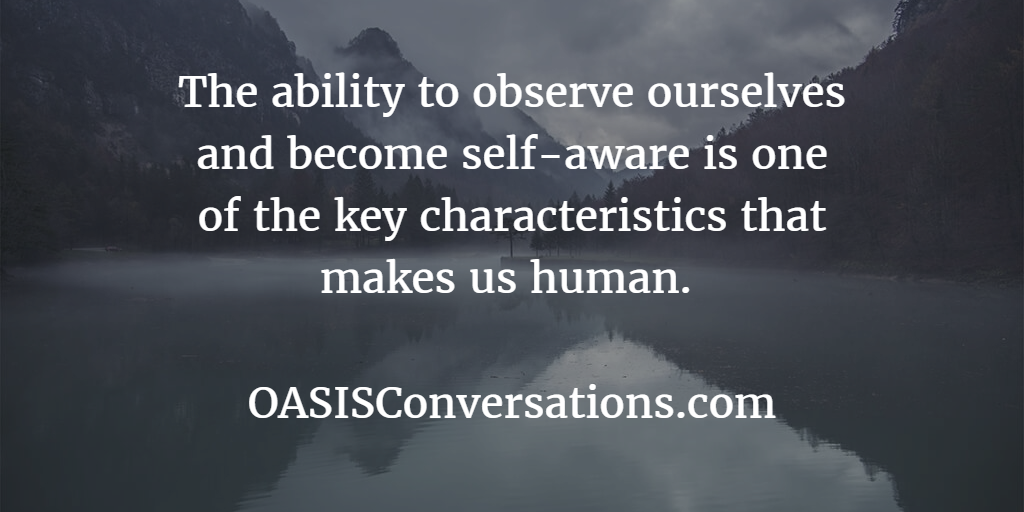 Examine your assumptions, emotions, and background before choosing what to share with others. Internally, we process what we observe, making sense of it, and then select an action or response. Sometimes, this process happens very quickly. We may feel we don’t have a lot of choice about our actions, particularly when we have a strong emotional reaction.

The ability to observe ourselves and become self-aware is one of the key characteristics that makes us human. We have the capacity simultaneously to make assumptions about an observation, experience emotions, and also become aware of what is going on. It is as if we are in a theatre, shining a light on the actors and noticing their thoughts and feelings. When we notice our excitement, some part of us is feeling excited and another part is noticing this emotion. Becoming aware is a critical tool for managing and supporting ourselves to engage in valuable conversations. When we are aware, we are more free to make a choice about how we will respond and what we will share with others. END_OF_DOCUMENT_TOKEN_TO_BE_REPLACED