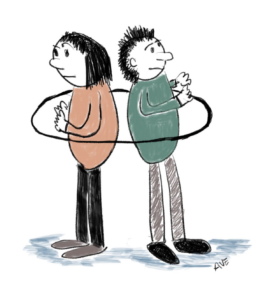 In the work environment, where so much of our time and energy is spent, conflicts and differences in perspective inevitably arise. When necessary, Agreement Meetings effectively resolve challenges and promote more productive and satisfying work relationships.

The agreement coach meets with each party separately to provide support and gain insight into a situation. Then a meeting with the people involved is facilitated. As an outcome of this meeting, agreements as to what each person will do are written and commitments are made. Periodic follow-ups are conducted to assess whether terms of agreement are being met and to determine the need for additional processes and agreements. People involved receive coaching support to fulfill promises.

This type of intervention differs from mediation in that each person receives invaluable ongoing support and follow-up to ensure a satisfying resolution and productive outcomes. The coach learns about the greater context and supports the organization when clarification and change is needed.

Agreement meetings can be extremely productive between any individuals or teams experiencing communication challenges, including an organization president and direct reports, leaders and staff, team members, and business unit heads. Relationships dramatically improve when common ground is explored, expectations are clearly determined, as sense of accountability is established and support from a coach is provided.

Potentials has achieved great success at “unsticking” individuals and groups through commitment and agreement processes.

A significant conflict between a Chief Information Officer and the Head of IT of a corporation caused each to duplicate the functions in their areas. Despite bringing in many consulting firms a difficult technical problem that impacted the direction of the business could not be resolved.Potentials worked with each leader to understand their perspectives and concerns. In addition, we talked with their colleagues and staff. We learned that this conflict was mirrored at all levels of the organization. We brought the two together and supported them to understand each other’s perspective and to find common ground and to forge agreements. We then supported dialogue between their bosses as well as between their respective staff.

In a short while, a big challenge became an opportunity. A solution for the difficult IT problem was also resolved after the two leaders were able to talk more openly. Relationships were enhanced throughout all the levels and the organization was more able to achieve their strategic vision.

A conflict between a leader and his direct reports stalled progress on an important initiative. Potentials provided coaching to the team members and facilitated dialogue to create understanding and agreements. We followed up with the individuals providing coaching and also worked with the team and the leader to ensure that things stayed on track.All reported satisfaction with the process and the team continued to work together for years and became a model for other parts of the organization. Results soared in this department.

Significant conflict between departments was causing headaches for this organization. Potentials worked with each department head and also with team members from each department to identify the long-standing issues and to support people in being open to address issues. We facilitated agreement meetings with the leaders and worked with them to communicate the agreements and to spread the positive good will through the organization. We served as an independent resource to support the changes in behavior and to ensure that agreements were working. We assisted in revising the agreements as needed. Coaching for the leaders supported the change in being implemented.The head of the organization, HR and the leaders themselves were grateful to have outsides assistance to help break the tension and to hold everyone accountable to following through on agreements. All reported that they were working more effectively and the environment was more productive and positive.

“You must be the change you want to see in the world.” —Ghandi