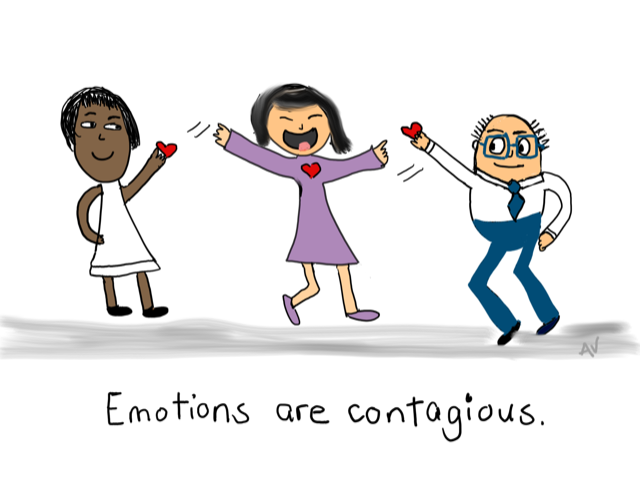 “Emotions are contagious. We’ve all known it experientially. You know after you have a really fun coffee with a friend, you feel good. When you have a rude clerk in a store, you walk away feeling bad.”—Daniel Goleman

“He’s saying all the right things, but I don’t trust him.” “Something’s not right.” “I feel on edge around him and I’m not sure why.”

These were comments made about a new senior leader of an organization. People told me he did thank others and seemed to involve people. His words were positive and supportive, but they felt uncomfortable and judged by him. In this environment of uncertainty, his colleagues felt nervous around him. Trying to manage their feelings of being judged and their lack of trust took a lot of energy away from creative innovation. Rather than speaking freely and brainstorming, people were more careful around this leader and then their worry became a self-fulfilling prophecy. The leader became more critical and harsh.

When I talked with the leader, he was indeed judging his team and he was frustrated with what he identified as “laziness and lack of insight.”  The new leader was worried about making progress and felt stressed with making changes. Yes, he was polite on the outside, but people sensed his real emotions, even when they were not exactly clear on what caused their discomfort. In reality, emotions are contagious and we are constantly picking up emotions and concerns.

I first understood the contagious nature of emotions when I was young. I had been bitten by a dog and was fearful of large dogs. Of course, every large stray dog zeroed in on me on the playground. How could the dogs sense my fear?

Animals and humans sense and share emotions easily. We think we are separate individuals and that our emotions are private. However, functional MRIs show that as we interact, others are absorbing our feelings continually and often without awareness. We are affected by the emotions we absorb and they influence our actions.

We are inducing emotions in others as we experience them and vice versa.  For example, when a parent is stressed or angry, children respond by being distrustful or anxious.

Emotional transfer works in two ways. First, we unconsciously mimic those around us. Have you ever noticed that your arms are crossed when the person you are interacting with also has crossed arms? We unconsciously mimic other people’s facial expressions and gestures automatically. If someone is experiencing stress or judgment, we naturally tighten our body too. Second, in addition to mimicry, we empathetically respond to other’s emotions. If someone is happy, we are more likely to feel positive. If someone’s face seems fearful, we are likely to experience fear, imagining there is something to fear. Recent research supports that our brains easily and quickly transmit emotions. This capability helps us to survive.

A study conducted by Mendes and colleagues brought mothers into her lab in San Francisco with their young children. They attached sensors to the mothers and babies and separated them. One group of mothers was asked to give a speech about their strengths and weaknesses in front of strongly judging raters and another group gave their speech to themselves in front of a mirror. The mothers with the judges picked up the emotions of the judgers and in turn their children adopted the same sense of fear and did not want to play with the researchers. On the other hand, the positive mothers transmitted their positive energy to their children who continued to be happy at the lab.

What does this contagious nature of emotions imply for leaders? A lot. First, leaders need to pay attention to their own emotional states. It is useful to name our emotions and then take actions to support positive emotions recognizing that others are picking up our emotional state and are likely to act from it.

I notice that my worry or stress impacts my child’s stress. When I am more positive and relaxed, I sense my child is too. The same is true when I work with teams. My positive, hopeful and expectant state is often mirrored to me by team members.

It is valuable to recognize that we are unconsciously influencing others. We can make it our intention to be mindful of our state and work to positively influence others. We can work to allow others to benefit from our hopeful states.

With some coaching and increased awareness the leader mentioned above was able to shift his judging and became more open and genuinely supportive of his team members. In turn, they became more comfortable and the team was better able to create a shared vision and pursue challenging goals together.

Pay attention to your emotional state and notice your impact as well as how you are influenced by the state of others. Given that emotions are contagious, how will you infect others today?  Ideally, you will experience an oasis and spread positivity.