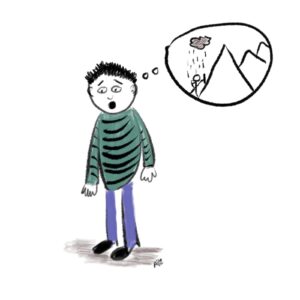 We are always making assumptions about others, ourselves and our situations. We naturally create stories based on our past experiences as a way of ensuring our safety.

David, a manager, shared with me that team members did not support his ideas and were out to make him look bad. He felt frustrated. With this story, he worked harder to demonstrate his expertise and how he was correct in his proposals. However, the harder he worked to demonstrate he was right, the less he seemed able to inspire people to listen and align around a strategy.

When we “know” we are right and feel such frustration and contraction, we need to stop and take a look at the story we are telling ourselves. We could say to ourselves or a coach or friend, “The story I am telling myself is . . . that my colleagues are not interested in what I have to say and that they are even against me.”  Then we can assess what is a true fact or observation and what is our assumption or judgment. It is true that team members questioned the findings. They asked, “How did you arrive at that conclusion?”  Is it true that they are against you? This is more likely your story and your self-fulfilling prophecy.

When David became aware of his role in the tangle, he was able to take the first moves to listen and include colleagues in his thinking process during development and to show that he was a team player. He reflected on what he appreciated about team members and became more caring toward them. He was able to forge a more positive and healthy dynamic.

By questioning our stories and separating facts from assumptions, we are better positioned to create more positive and productive relationships and unparalleled results.