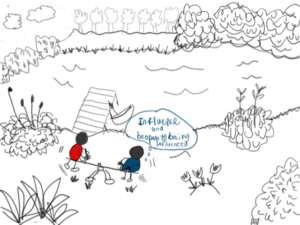 “Let go of your attachment to being right, and suddenly your mind is more open. You’re able to benefit from the unique viewpoints of others, without being crippled by your own judgment.”—Ralph Marston

T., an executive coaching client, was clearly an expert in his field. He was recognized both inside and outside his organization as being very bright. The company valued his contribution and considered him a key player.  He received awards and recognition for his innovative ideas and programs.

T. was asked to work with an executive coach to round out his leadership style.  After I interviewed peers, colleagues and clients, it became clear that while T. had strong leadership skills and influenced how things were done and interpreted, he was not open to being influenced.

Many people complained that T. did not listen and always thought that he was “right.”  The challenge is that he felt he was the most knowledgeable person in the room or the team.  T. tended to cut people off and left people with the sense that he felt he was better than most.  He was able to use his quick wit and fast mind to his benefit most of the time. However, as he progressed in more senior roles, his overly confident style and lack of openness began to hurt him.

T. could not understand why so many people complained about him to HR. He felt justified in telling people that they did not have the answers needed.  The company struggled with how to keep his talent without his challenging style. These days, no matter how bright or capable an individual is, no one has all the answers.  We will only succeed by being open to new ideas and ways of doing things.

Fortunately, in this case, T. learned that effective leaders not only influence others, but are also open to being influenced. As he practiced listening more, giving empathy and reflecting what he heard, he developed an entirely new relationship with colleagues and clients. His new mindset of openness became contagious. People became more open to sharing their ideas as well as supporting his efforts.

T. had not thought about the power of being open-minded and listening to others.  When he practiced being open he became a much more effective leader and continued to be valuable and progress in his career.  The biggest surprise for him was the deeper connections and more trusting environment he fostered. To his delight, he and his team excelled at an even higher level than he dreamed possible.  Energy was shifted from complaining and stress to more positive avenues.

T. and his company were fortunate. I recall a similar experience where people advocated that a company keep a leader due to his knowledge and expertise.  People put up with his abrupt style. He was not open to feedback or input. People did not trust him and felt he was not open to other’s ideas. However, after a few years and after strong people left the organization because they did not want to work with him, he was finally asked to leave.  It was a loss for him and the organization. However, without the ability to listen and be open to others and create a trusting environment, this leader could not be effective.

Ask yourself, “Am I open to being influenced as much as I am focused on influencing?”  Envision a see-saw. How balanced is the ride?